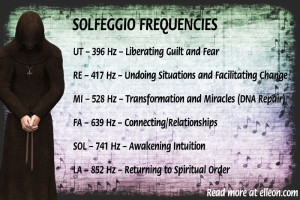 "SOLFEGGIO FREQUENCIES were sound frequencies used in Gregorian chants one of which was the great hymn of St. John the Baptist. The special tones of the Solfeggio frequency were used to unite man with his maker. They did this by undoing all the conditions and conditioning that cause separation from source, be it physical, mental or spiritual.

The Solfeggio frequencies were so effective that they undermined the power of the Vatican so they were conveniently “lost” and went into oblivion for a very long time.

It was due to the inspired Dr Joseph Puleo that the Solfeggio frequencies were rediscovered. This is explained in the book “Healing codes for the Biological Apocalypse” by Dr Leonard Horowitz.

Dr Joseph Puleo is a naturopathic physician and one of America's leading herbalists, who began his research of the Solfeggio frequencies in the mid-1970's. In his examination of the Bible he found in Genesis: Chapter 7, Verses 12-83, that there were a pattern of six repeating codes around a series of sacred numbers, 3, 6 and 9. When he deciphered these using the ancient Pythagorean method of reducing the verse numbers to their single digit integers, the codes revealed a series of six electromagnetic sound frequencies that correspond to the six missing tones of the ancient Solfeggio scale.

The Solfeggio frequencies contain the six pure tonal notes that were once used to make up the ancient musical scale, until, it has been presumed, they were altered by the Catholic Church and Pope Gregory I, (better known as "Gregory the Great"), who served from 590 to 604 AD. The Church claims that they have "lost" 152 of these amazing ancient Gregorian chants, but more than likely, they have been purposely locked away in the bowels of the Vatican archives. One of those sacred chants, however, known as, "The Hymn to St. John the Baptist," has re-emerged. It has become known as the most inspirational hymn ever written and features all six Solfeggio notes." ~ Content source and further reading here -  http://www.lifeenergysolutions.com

WARNING: When I first made my 528Hz (DNA repair) playlist on Spotify, I was starting to associate that I was frequently getting sick. I would get the 'flu' a lot. But it was more of a one-day flu. Tired, achey, fever, swollen glands, headache... I'm not sure when it dawned on me that I was suffering from a Herxheimer reaction. When your body detoxes and is overloaded by the toxins being released, you can suffer from a Herxheimer reaction. Read my post about Herxheimer Reactions for more info.