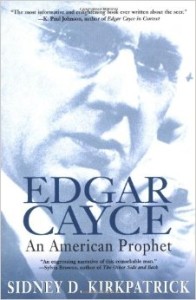 In 2001, I was watching a show on the History Channel. It highlighted four famous psychics in America during the 1900's. I honestly can't remember who three of them were. The fourth resonated deeply with me. His name was Edgar Cayce. I immediately went to Barnes & Noble and bought a book titled, "Edgar Cayce: An American Prophet", by Sidney Kirkpatrick. So many truths came to light for me. Reincarnation. The Source. Angels. Souls. The Law of One. I have read it many times and have purchased multiple copies that I have shared with friends and family who I thought might be open to accepting new possibilities.